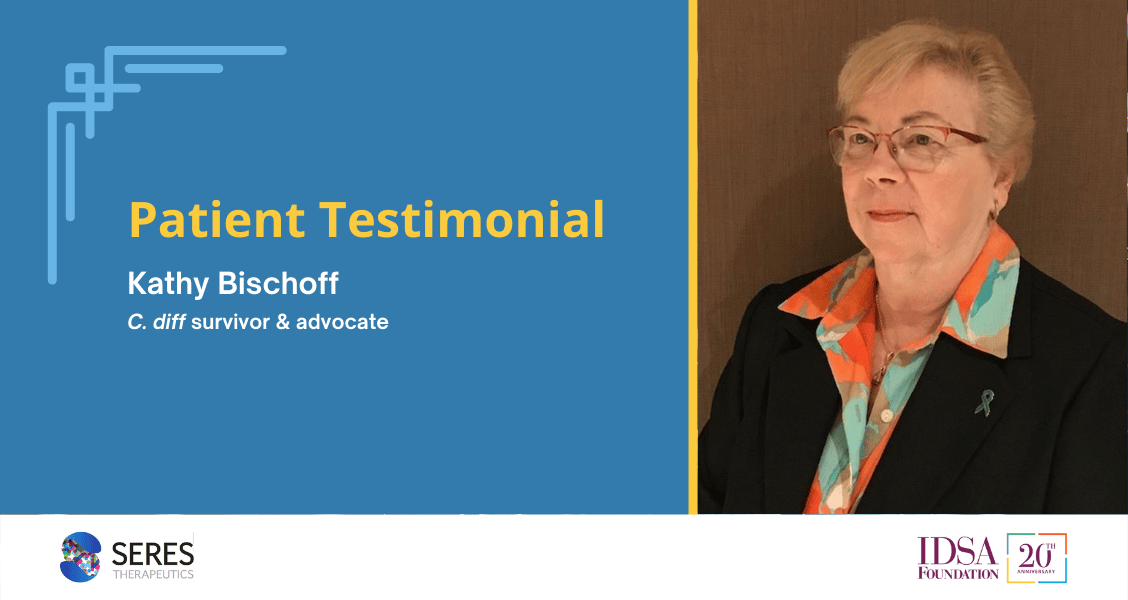 When Kathy Bischoff retired, she had plans to live out her dreams to travel and settle down in the Ozark Mountains. That dream quickly turned into a nightmare when she experienced her first diagnosis of Clostridioides difficile.

Despite affecting nearly 500,000 Americans each year, very few patients hear of C. diff before their diagnosis. Bischoff herself faced seven reoccurrences of this life-threatening disease within two-and-a-half years. Now, she is a volunteer for the C Diff Foundation and shares her story to educate, advocate and bring hope to patients across the country.

Her story begins with an ongoing struggle with diverticulitis. One December morning, she suffered another attack and was transported to the hospital. This was her fourth attack in three months, and as with previous occurrences, she was treated with antibiotics. In some cases, she was prescribed double the normal amount when symptoms persisted.

She learned of her C. diff diagnosis upon discharge. Like many others, that was the first she had heard of C. diff. She didn’t know what to expect or what precautions to take. She was simply prescribed medication, and she assumed it would go away.

After seven C. diff reoccurrences and several hospital stays, Bischoff now understands the severity of the infection. She found herself completely caught off guard.

“I find the lack of information that was shared with me completely unacceptable, and that was the beginning of my C. diff journey,” said Bischoff. “About a month later I ended up back in the hospital.”

After her first experience with C. diff, Bischoff spent eight days in the hospital due to another diverticulitis attack. She discussed options with her physician and decided to have surgery. She did not recover as expected and was again admitted to the hospital. This time, she was diagnosed with her second C. diff infection. She experienced six more reoccurrences and three additional hospital stays. Bischoff and her husband’s dream of a quiet, peaceful retirement in the Ozark Mountains was no longer a reality.

Bischoff felt incredibly isolated. She didn’t want friends or family to visit out of fear of an uncontrollable bout of diarrhea. She was constantly tired, nauseated and dehydrated. Leaving the house for doctors’ visits involved rigorous preparation, including lining car seats, packing an extra pair of clothes and bringing soap and water. Her husband became her caregiver and worked hard to raise her spirits.

Each time she began a new treatment, Bischoff was hopeful. But each time, C. diff reoccurred. Her system became incredibly weakened, and she could no longer restore the needed beneficial bacteria to her microbiome to fight the infection. She was losing hope.

“I was physically, psychologically and emotionally exhausted and questioning: ‘Can I go through this again? Was this reduced quality of life going to be my future? Would I have a future?,’” said Bischoff.

Bischoff knew she could no longer continue down the same path, and the specialists treating her seemed to be at a loss of what to do. They assured her they would do additional research, but she never heard from them again.

Desperate for a solution, Bischoff knew she had to look at other options. It was then she found the C Diff Foundation.

“Sick and frightened about my future, I made the decision that I had to advocate for myself and my own survival,” said Bischoff.

Bischoff called into one of their support sessions and for the first time felt relief.

“I was finally receiving so many of the answers I was looking for,” she said. “I was treated with compassion and understanding… I found people who finally understood.”

Through the C Diff Foundation, Bischoff learned more about recommended nutrition and environmental safety, among many other topics. Most importantly, she also learned about clinical trials. She discussed applying as a candidate for a clinical trial for recurrent C. diff with her physician. Bischoff was screened and enrolled. For the first time, she felt empowered and hopeful.

Upon completion of the trial, Bischoff says the treatment worked. “We won the battle, and I had gained a friend,” she said.

Today, Bischoff still worries about another C. diff infection. She has since had another surgery, and due to complications, she again was given antibiotics.

“It was remarkably frightening. My greatest fear was now a reality,” said Bischoff. “Would they cause another C. diff infection? And what could I do? The answer: I advocated for myself. I became part of my treatment.”

The infections were successfully treated, and she remained C. diff free. Educating herself about the infection made it possible for Bischoff to be proactively involved in her medical care and advocate for herself.

Her journey is not yet over. Now, she is an advocate for C. diff patients everywhere through her volunteerism with the C Diff Foundation. Her goal is to increase awareness of C. diff and to empower others to make informed decisions about the prevention and treatment of this infection.

To physicians, researchers and clinicians, Bischoff says, “Your commitment, your dedication and your focus and research in the prevention and treatment of this horrific infection is so needed and deeply appreciated. What you do by educating and advocating for the prevention, treatments, clinical trials and environmental safety of a C. diff infection and reoccurrence truly matters.”

Dr. Godofsky, a current IDSA Foundation board member, worked closely with John G. Bartlett, MD, FIDSA, for decades as a mentee. He introduced the dedicated education series and shared his personal perspective on the legacy of Dr. Bartlett, his trailblazing work and mentorship of many.

Dr. Wilcox serves as head of research and development in microbiology at the Leeds Teaching Hospitals NHS Trust and is one of the most prolific authors and researchers in the field. He presented “Optimizing the treatment of CDI requires understanding why it occurs,” a lecture focused on new understandings in the pathogenesis of C. diff, as well as options for treatment.

This content was produced by the IDSA Foundation and is supported by Seres Therapeutics.