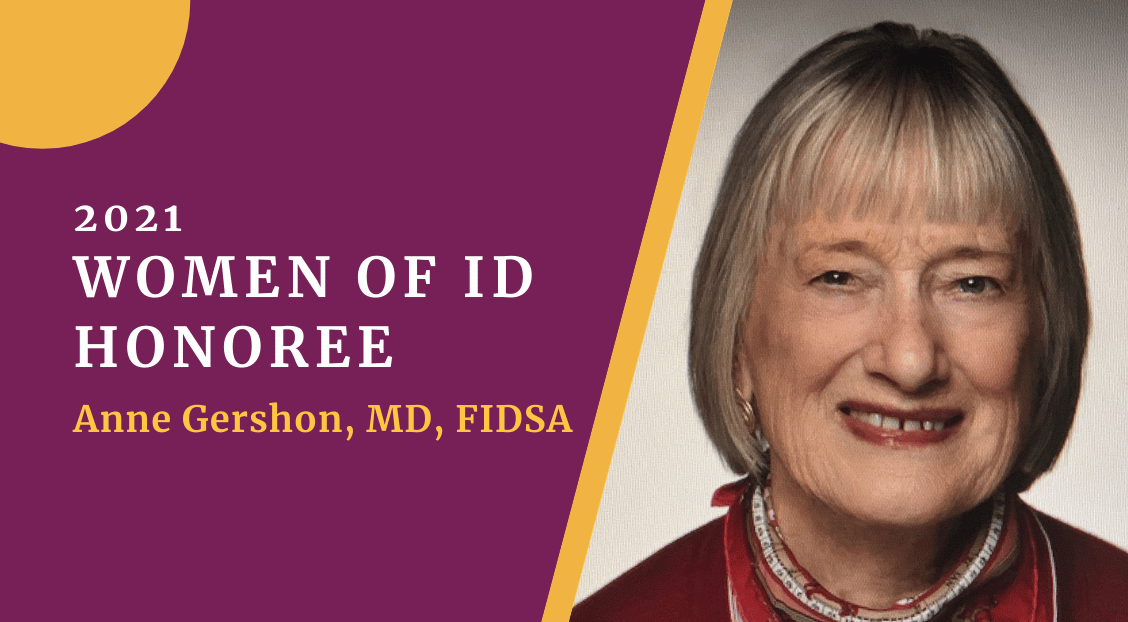 Sometimes you choose your career path, and other times your career path chooses you. That statement is certainly true for Anne Gershon, MD, FIDSA, a pediatric infectious diseases specialist at Columbia University Vagelos College of Physicians and Surgeons. Heavily influenced by fate, Dr. Gershon landed in pediatrics, infectious diseases and vaccinology, and the impact of her work with the varicella-zoster virus (commonly known as chickenpox) has been felt on a global scale.

While her earliest success was to develop the first sensitive diagnostic methods for chickenpox infections in the early 1970s (when none were available), she is most known for her studies of the safety and efficacy of the varicella vaccine in children and adults with leukemia. These studies were critical to the vaccine’s further testing and eventual licensure for healthy children in the U.S. during a time when the vaccine was controversial.

We sat down with Dr. Gershon to learn more about how her clinical and research interests were developed, her pivotal role in the study of chickenpox and what she hopes to see for the future of vaccines.

What made you decide to pursue a career in infectious diseases?

I developed an interest in infectious diseases and vaccines because I could not seem to escape infectious diseases in my personal life. Early in my marriage, when my husband and I were medical students, we dealt with toxoplasmosis from hamburgers and mononucleosis (both with jaundice). When I was in my 9th month of pregnancy, I had mumps during labor, which had been passed to me by my 5-year-old firstborn. I also had bad staphylococcal infections during my pregnancy. Those were some of the infectious diseases that I had personal experience with, and I realized that with vaccines, there was a chance that many infections could be prevented.

I also owe my interest in vaccines to Cornell medical school, because we had wonderful infectious disease teaching. Among other infections, we learned about polio, and of course, polio was eliminated in the U.S. by a vaccine. We were also warned to expect a terrible future pandemic similar to the influenza epidemic of 1918.

What interested you in working specifically in pediatric infectious diseases?

At the time that I entered medical school, it was no secret that women were not wanted in medicine. I love children, but one reason I went into pediatrics was because it was essentially the only field open to women at the time. Even OB/GYN was a strictly male club, and heaven forbid if you wanted to be a surgeon. And among the women who were successful in pediatrics and research, they were mostly married, but they didn’t have families. That’s where people like Cathy Wilfert, MD, and I came in, because we succeeded in academic medicine and had families. To live a life that’s full and complete – it’s a shame to live it on your own.

What were your early career goals and your steps to achieve them?

I entered academic medicine because I was hoping to discover something new that would help patients. I wanted to achieve a vaccine against chickenpox. The chickenpox vaccine was very controversial when it first came out. In medical school and at Oxford, we were expected to do research, and I had learned a new assay called the fluorescent antibody technique. And then Japanese virologist Michiaki Takahashi, MD, wrote in The Lancet that he had developed a vaccine against chickenpox, and physicians became very angry. Many thought it was a horrible thing to do. There were emotional letters that appeared in the literature saying, “Don’t do this. It’s dangerous.”

However, in the U.S., we were curing children of leukemia for the first time, and many of these children got better only to die of chickenpox. This situation was highly unacceptable. It turned out that based on fluorescent antibody technique, it was very clear that the vaccine was going to work and be safe. That’s how I got involved with it. I managed to put together a workforce, the Varicella Vaccine Collaborative Study Group, which was sponsored by the NIH, where we actually showed that we could save the lives of leukemic kids from chickenpox by vaccinating them. This was a devoted group of pediatric investigative scientists who worked together. The vaccine proved to be approximately 80% effective in preventing clinical varicella in children with leukemia and completely effective in preventing severe varicella in this high-risk group.

I was fortunate enough to be able to study the effectiveness of live attenuated varicella vaccine with many colleagues, including those at the CDC, and trainees. It turns out that another big advantage of that vaccine is that it seems to prevent shingles from occurring in many cases. It’s not 100% effective, but it’s better than having the infection. For any scientist, working with trainees is rewarding and useful. I was fortunate to work with a number of outstanding trainees.

Varicella is a very interesting virus to work on. I’ve spent my professional life working on chickenpox, but I learn something new every day. Working with my husband, Michael Gershon, MD, we discovered that varicella-zoster virus infects the nervous system of the gastrointestinal tract and causes several diseases there, including colitis, stomach ulcers and achalasia in adults.

Did you have any mentors who helped you achieve your goals?

Just like my husband, my mentors didn’t look down on women in medicine. One of my early mentors was Saul Krugman, MD, who discovered hepatitis A and B and then developed the hepatitis B vaccine. He was a big supporter of women, and he really understood vaccines. He was very helpful in guiding me in how I studied the chickenpox vaccine.

Another mentor of mine was Samuel Katz, MD, PhD. Dr. Katz had a big influence on me. One of the things he and Dr. Krugman did was recommend that I be invited to join the Committee for Infectious Disease of the American Academy of Pediatrics, which is a very powerful committee that helps to design and recommend the use of vaccines and antibiotics for the treatment of infectious diseases for children. I was invited to join that committee when we were developing the recommendations for the use of the chickenpox vaccine.

Richard Whitley, MD, is someone who has been very supportive of me as well. I have also had the fortune of working with Robert Edgar Hope-Simpson, OBE, FRCGP, Hon FFPHM, who demonstrated shingles was caused by reactivation of the chickenpox virus in the elderly.

Others in the field that inspired me include Donald Poretz, MD, FACP, FIDSA, who was president of IDSA before me; Henry Masur, MD, who was also a president of IDSA when I was coming up that ladder; and of course, my dear husband, Michael Gershon, MD. Lucy Tompkins, MD, PhD, was also highly successful in crusading to get women accepted as officers of IDSA.

Why should medical students consider choosing ID as their subspecialty?

Look what we’re living through. This is something I was warned about in medical school. I knew we were going to have a pandemic, but I never imagined it’d be like it has been.

Infectious diseases is an exciting and challenging field to go into these days. With diseases like COVID-19, it can be scary, but it’s important that we work out not only how to prevent and treat infectious diseases, but how we can get the public to understand them. There are people who would rather die than take the vaccine, so we need people who can convince the public about how vaccines and antibiotics can really save us.

Are there any women in the field of ID who inspired you?

Cathy Wilfert, MD, and Carol Baker, MD, both had a big influence on me. So did Dorothy Horstmann, MD, who was at Yale and did seminal work on rubella and polio. Yale developed a memorial lecture for her, and I was invited to deliver the first Horstmann Lecture. She was actually in the audience at the time.

Martha Yow, MD, was very supportive and gave me lots of advice on how to develop the chickenpox vaccine. And, as I mentioned, Dr. Tompkins played an important role in me being active in IDSA. I also had wonderful colleagues and trainees. You learn a lot from the people you train and those you work with.

As a Woman of ID, I’m moved to be included in such an August group. I feel grateful to have had the people to work with that I did, because if I achieved anything, I didn’t achieve it on my own.

What do you hope to see for the future of the field of ID?

Managing people who are against vaccines is terribly important. That may be one of the most important things we need to do. We also need to do more work on the proper use – and not overuse – of antibiotics. It’s so tempting to just take an antibiotic and get over whatever it is that ails you, but that’s wrong. We are making progress on this, but it’s not over.

Anne Gershon, MD, FIDSA, is a professor in the Department of Pediatrics at Columbia University Vagelos College of Physicians and Surgeons. Board certified in Pediatric Infectious Diseases, her research has included epidemiology, diagnosis, immunology, latency, prevention and treatment of varicella-zoster virus (chickenpox) infections. She served as the fourth woman president of IDSA from 2009 to 2010. She has received many awards, including IDSA’s Alexander Fleming Award (2015), the Annual Award for the National Foundation for Infectious Diseases (2019), the Pediatric Infectious Diseases Society’s Stanley A. Plotkin Vaccinology Award (2013), the Albert B. Sabin Gold Medal (2013) and the Smith College Medal (2021).

To support the Women of ID – past, present and future – please consider making a gift to the Foundation today.