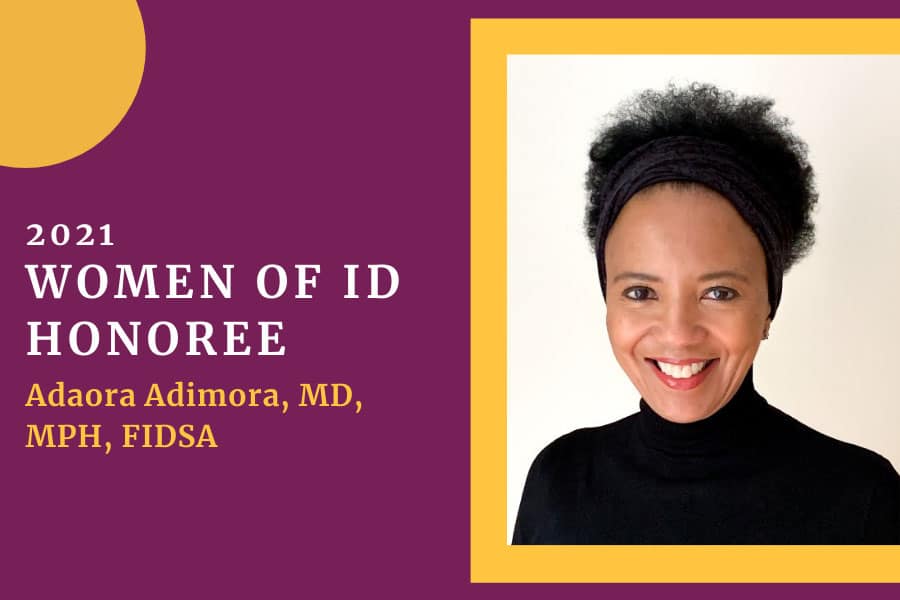 An experienced clinician and accomplished researcher, Adaora Adimora, MD, MPH, FIDSA, has spent her career studying the epidemiology of HIV and other sexually transmitted infections in historically marginalized populations across the country. Her work is key to addressing racial disparities in health care, and the IDSA Foundation is proud to honor Dr. Adimora as a 2021 Women of ID honoree.

Former HIVMA Board chair, recipient of the 2020 HIVMA Clinical Educator Award and featured speaker for the Edward H. Kass Lectureship during IDWeek, Dr. Adimora serves as an educator and mentor to the next generation of ID and HIV professionals.

We spoke with Dr. Adimora to learn more about her career in the field of HIV and those who inspired her along the way.

Why did you decide on a career in infectious diseases?

Throughout medical school and during my internship and residency, some of the most interesting and exciting cases involved infectious diseases. At the time, I liked the idea of diseases that have a beginning, a middle and an end, so I was attracted to infectious diseases.

Another huge reason – and maybe this was even the biggest one – was that the ID attendings were the nicest, most inclusive people. They included the medical students and the house staff, and they were so welcoming.

How did your career evolve and how did you come to specialize in the field of HIV?

I was open to different career paths in ID initially, and I had many opportunities along the way. Coincidentally, most of the jobs I’ve had were because of the HIV epidemic, and as I continued to work in the field of HIV, I was intrigued and concerned by the disproportionate impact of HIV on minority populations.

After fellowship, I worked at Harlem Hospital as an infectious disease attending for two years. Those  were the early years of the HIV/AIDS epidemic, and the wards were full of people with HIV. I then moved to North Carolina and worked at the North Carolina Department of Health and Human Services (NCDHHS) in the Communicable Disease Control section. Even though the job involved communicable disease control in general, the most active part of the position was HIV. I was later recruited to the University of North Carolina at Chapel Hill (UNC) as a clinician and pursued an MPH in epidemiology. That was enormously helpful.

One of the main things that helped launch my career was a NIAID R01 funding opportunity targeted to early-stage minority investigators. In addition to a research plan, it required the applicant to assemble a team of more senior consultants. So, I assembled a real dream team – Willard (Ward) Cates Jr., MD, MPH; Sevgi Aral, Ph.D., MS, MA; Robert Fullilove, EdD; and Jo Anne Earp, ScD. Vic Schoenbach, Ph.D., importantly was my mentor and a co-investigator on this grant, and without him, I would never have gotten it. I was very fortunate to have great opportunities and collaborators.

Did you have any other mentors that influenced your career?

I had some great mentors. One of my earliest mentors was Frank Lowy, MD. He was my mentor while I was an ID fellow at Montefiore/Albert Einstein College of Medicine. He’s actually a laboratory researcher, but I clearly did not have much aptitude for laboratory research, and we both recognized that. He was wonderful and helped me get a great job at Harlem Hospital, which I loved.

I’ve also encountered a lot of people who would be better classified as “sponsors.” During her talk at this past IDWeek, Emily Blumberg, MD, (we were fellows together at Montefiore/Einstein), explained that a sponsor is someone who provides you with opportunities, which is not necessarily the same thing as a mentor. For example, Fred Sparling, MD, enlisted me to edit a companion handbook to the second edition textbook Sexually Transmitted Diseases. I’m not sure this would have been an obvious career benefit for some people, but for me it was great. Editing the book enabled me to network with a lot of luminaries in the STD field. It also taught me a lot about writing. It was a great opportunity for me.

Another person who’s been a wonderful sponsor and long-standing, absolutely invaluable mentor is Sevgi Aral, Ph.D., MS, MA, at the CDC. Over the years, she’s given me many opportunities like writing articles for influential publications and giving talks at major conferences.

Another huge mentor for me was my late husband, Paul Godley, MD, Ph.D. He was just fantastic and was among the smartest people that I have known. He gave invaluable advice at every stage of my career.

Mike Cohen, MD, my ID director at UNC for many years, is another long-standing champion, mentor and sponsor. As one of many examples, he enlisted and helped me write the UNC Fogarty AIDS International Training Research Program grant application, and I was principal investigator of that grant for roughly 16 years.

Are there any women in the field of ID who have inspired you?

You know who was really an inspiration? Cathy Wilfert, MD. She was among the pioneer women in infectious diseases, and I met her when I worked for the North Carolina Department of Health and Human Services (NCDHHS) while she was at Duke. She was just a lovely person and incredibly accomplished. She really inspired me.

It is an incredible honor to be named a Woman of ID. So many other really extraordinary and inspiring women have come before me. I’m deeply honored to be in the company of those incredible women.

Why is it important for you to be part of a professional society?

Well-functioning professional societies like IDSA really can be among the most important advocates for issues that are important to the membership, including protection for ID physicians, salaries, the next generation of ID specialists, creating guidelines to inform care and weighing in on important policies and other issues. These are all difficult for individual physicians to do on their own, but it can be done by a group of experts who come together for a common cause and who speak with one voice.

Why is it important to cultivate a diverse workforce in the field of infectious diseases?

The U.S. is more heterogeneous than perhaps ever before. So it stands to reason that we will need different types of people to provide care and to address health care issues of the increasingly diverse population. But just as important is this: Diversity is critical because the lenses through which different types of people see the world brings creativity to problem-solving, and this is what we need now and in the future.

What’s the most rewarding aspect of your career in infectious diseases?

There are several rewarding aspects. I enjoy seeing patients, and additionally, they inform my research. My research career has provided the incredible opportunity to think about the problems I believe are the most important to address. If you think about it, that’s a luxury that many people don’t have and it’s unique to academic medicine. I also appreciate the opportunity to network and collaborate with national and international governmental agencies and research organizations to effect positive change in important issues.

Why do you believe it is important to invest in the next generation of ID professionals and what do you hope to see for the future of the field of infectious diseases?

The field of ID is going to be even more important in the future than it is now. In fact, we’re probably going to find out that more chronic diseases are actually caused by infectious diseases. Anti-microbial resistance is not going to go away any time soon, and we can expect more pandemics in the future.

Looking forward, I hope to see much better pandemic planning. I also hope that the intellectual contributions of ID physicians will be better appreciated in the future.

Adaora A. Adimora, MD, MPH, FIDSA, is a Sarah Graham Kenan Distinguished Professor of Medicine at the University of North Carolina School of Medicine and professor of epidemiology at the UNC Gillings School of Global Public Health.

She has dedicated her career to investigating the epidemiology of HIV and STDs among minority populations and has closely studied the correlation between sexual network patterns and critical contextual factors, including poverty and racism, and their relationship to rates of HIV and other sexually transmitted infections in the United States. Today, Dr. Adimora serves as Principal Investigator of the UNC site of the Multicenter AIDS Cohort Study-Women’s Interagency HIV Study Combined Cohort Study (MACS/WIHS CCS). She was former Chair of HIVMA and has served on the NIAID Advisory Council, the Presidential Advisory Council on HIV/AIDS, the DHHS Antiretroviral Guidelines Panel, and the International AIDS Society’s Governing Council. She has testified to the US Congress about drug pricing and about incarceration’s role in the epidemiology of HIV among Black Americans. In 2019 she was elected to the National Academy of Medicine.

To support the Women of ID — past, present and future — please consider making a gift to the Foundation today.