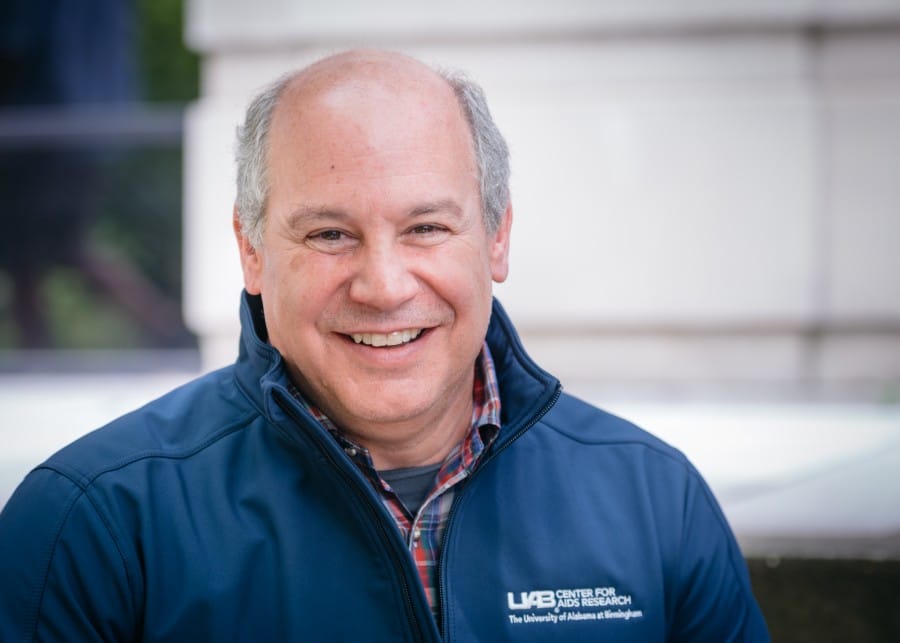 The first role infectious diseases specialist Michael Saag, MD, FIDSA, played in the COVID-19 pandemic was that of a patient.

He had just arrived home in Alabama after a 20-hour car ride from New York City with his son, Harry, on March 12, 2020, when Harry spiked a fever. Within days, Dr. Saag also developed symptoms, and he and Harry both tested positive for COVID-19.

Over the next two weeks, Dr. Saag battled symptoms that quickly progressed from mild to more severe, including a high fever, profound muscle aches, loss of appetite and an inability to concentrate. At 64, he was concerned for his safety, with fears of being hospitalized and placed on a ventilator.

Once he overcame his illness, he didn’t waste any time putting his personal experience and expertise to work for the benefit of those around him.

Backed by decades of experience in the field of ID, Dr. Saag attributes all of the passion and direction that guided his response to COVID-19 to the patients he treated during the HIV pandemic in the 1980s. These patients, whom he refers to as the “heroes of the era,” taught him three things:

“The day of my diagnosis, I stuck my arm out and said, ‘Draw blood,’” recalled Dr. Saag. “I volunteered as a research subject as soon as I was infected. Two months later, I had a central catheter line placed and donated 500 cubic centimeters of plasma and billions of cells. I’ve been on a data safety monitoring board for a large national study for treatment of people in the ICU not because I’m a scientist, investigator and physician – I’m the patient representative.”

In April 2020, he published an op-ed in the Washington Post about his experience battling the disease with a stark warning about the threat the virus posed: “This will not be the last time a virus skips from animal to human. It should be the last time we are so unprepared.”

But Dr. Saag’s work didn’t end with his personal recovery. As a researcher, he led numerous studies looking at outcomes among people living with HIV who developed COVID-19. In patient care, he volunteered to serve in the COVID-19 outpatient clinic at the University of Alabama at Birmingham, where he helped to establish a monoclonal antibody clinic to reduce the severity and duration of illness in patients who met certain criteria.

In local service, he spearheaded a testing campaign for all 280,000 students in the state of Alabama who were returning to colleges and universities. In just six weeks, the team created from scratch a platform and process that tested around 200,000 students within 10 days before they got back to campus or as they arrived back on campus. This effort included managing logistics such as lab capacity to manage 6,000-8,000 samples per day; ensuring the results were returned to the student, college and state; having people at each college to conduct testing; and tracking all samples through transport back to Birmingham.

Despite all of these efforts, he still had time to educate the masses through local and national media interviews, assist with vaccine distribution and see patients in the hospital on consult – all while maintaining his regular day-to-day responsibilities.

“I find all of that service and activity to be a bit of silver lining in a very clouded, horrific experience. Rather than sitting back as a spectator, I’m actively participating in the response and getting engaged in ways where I’m in a position to become engaged,” said Dr. Saag. “ID doctors are called to serve as unpaid consultants to all of these entities to help people respond in the most appropriate way. I can’t think of a single ID doctor who hasn’t stepped forward like I have. It’s like a call to battle.”

As he reflects on the parallels between COVID-19 and HIV, he notes the differences in timelines. It took two years to uncover the cause of AIDS after the CDC released its initial report in 1981, and a test wasn’t released until 1985. The first treatment was released in 1987, and 40 years later, there still isn’t a vaccine.

In contrast, a candidate vaccine for COVID-19 was developed just two days after the virus’ identification and sequence was released on Jan. 10, 2020. The first drug was released within months, and vaccine results in 40,000 people were analyzed and released in less than a year. By April of 2021, vaccine production had outpaced demand.

“I would argue strongly that the fundamental reason we were able to do so much so fast with COVID is grounded in HIV research that goes back four decades. It’s not only HIV, of course, but the nature of how to do clinical trials well, quickly and efficiently without being in a hurry, and the nature of understanding virology, how viruses replicate and how you interfere with that replication,” said Dr. Saag.

From a science standpoint, he believes we’ll be even better prepared for the next pandemic, noting that the place where we’re still lacking is in unity when it comes to a national response.

As the field of ID continues to hold the global spotlight, Dr. Saag believes it’s more important now than ever to support ID specialists and to ensure we’re replacing the highly experienced professionals who are retiring daily.

“If there was ever any question about the value of an ID doctor, that has been put to bed. I think now the question is how we can meet the need in the future, because right now, there is a shortage of ID professionals,” said Dr. Saag. “That shortage will only grow unless we proactively respond and prepare programs to train more people and support them.”

For more COVID-19 stories from the front lines, check out our latest annual report.