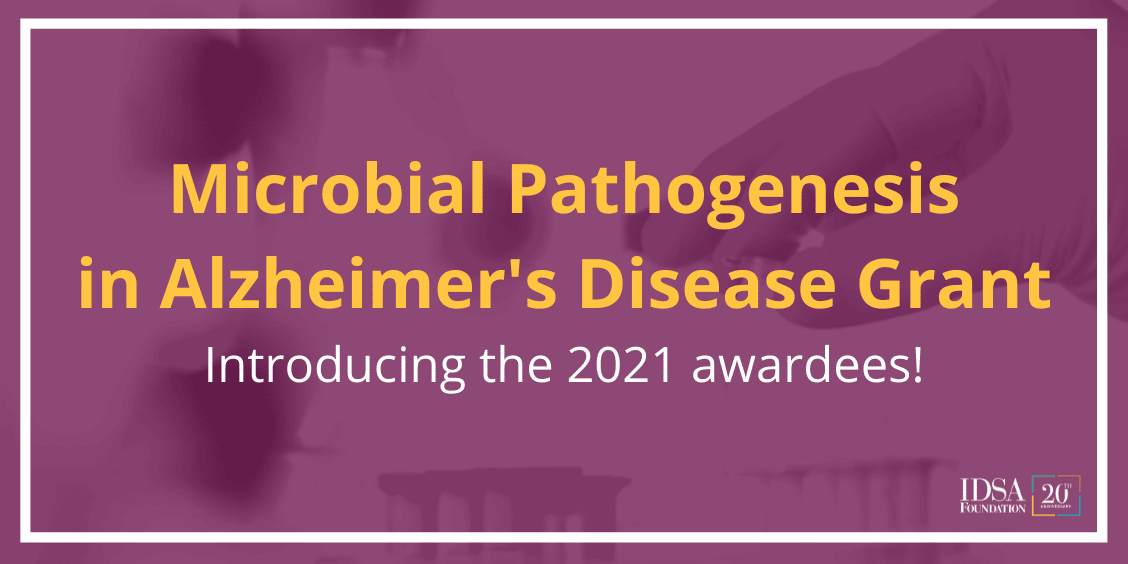 The Infectious Diseases Society of America Foundation recently awarded more than $1.7 million in grant funds to advance novel research into possible links between infectious diseases and the causation of Alzheimer’s disease.

The grant funds, which were awarded through the Foundation’s Microbial Pathogenesis in Alzheimer’s Disease Grant program, were dispersed among 11 researchers representing a wide range of research fields and institutions across the U.S.

“We’re excited that this grant program has grown, spurring investigations into whether infection causes Alzheimer’s disease to develop,” said Paul Auwaerter, MD, MBA, FIDSA, clinical director of the Division of Infectious Diseases at Johns Hopkins University and chair of the IDSA Foundation’s Board of Directors. “The program’s goal is to provide support in an area where such funding is limited. This grant funding has ignited new research and also provides additional support to past successful applicants who have shown significant progress within their research.”

Evidence suggests Alzheimer’s disease may have a link to infectious diseases or a microbial mechanism, but the lack of funding has left this potentially significant link largely unexplored. Now in its fourth year, the Microbial Pathogenesis in Alzheimer’s Disease Grant program aims to bridge this gap by bringing together a diverse range of researchers to investigate whether infectious diseases may be a cause of Alzheimer’s.

Laura Cox, PhD, a 2020 grant awardee and 2021 review panel member, recently received an R01 grant of $1.25 million in direct costs over five years to extend the pilot project she was able to start with the IDSA Foundation’s grant funds. Colette Cywes-Bentley, PhD, one of this year’s grant awardees, received an additional $250,000 to expand research she was able to start with grant funds she received as an inaugural awardee of the grant program in 2018. She was one of only two awardees in 2018 and received a $50,000 grant.

To encourage a wider range of applicants from various fields and at various career levels, the 2021 program offered varying award amounts based on the merits of the projects selected. Grants ranged from $30,000 for fellows or early-career investigators to obtain preliminary data to $250,000 for established investigators who have already developed initial research.

A total of 78 applications were reviewed by a convened review panel comprised of 18 experts from across the country. The research projects developed by these grant recipients will launch promising new directions in Alzheimer’s-related research that could lead to new developments in testing, early detection and treatment.

The 2021 grant recipients are:

Researchers will use basic, clinical and/or non-traditional approaches to narrowly focus on elucidating the possible roles of infectious agents in the causation of Alzheimer’s disease.

To learn more about the Microbial Pathogenesis in Alzheimer’s Disease Grant program, or for more information on projects from past awardees, visit IDSAFoundation.org/alz-research-grant.

Funding for the Microbial Pathogenesis in Alzheimer’s Disease Grant program is supported through a partnership with the Alzheimer’s Germ Quest and The Benter Foundation.

Celebrating its 20th anniversary this year, the IDSA Foundation is the nation’s leading nonprofit organization committed to reducing the burdens of infectious diseases worldwide. Founded in 2001, the IDSA Foundation is the Infectious Diseases Society of America’s charitable arm, committed to providing career development opportunities, supporting education and funding groundbreaking research. Through its work, the Foundation invests in the next generation of diverse ID leaders, supports innovative research and promotes advancements in patient care.

Alzheimer’s Germ Quest is a public benefit corporation with the mission of accelerating and deepening investigations into possible microbial causes of Alzheimer’s disease.

About The Benter Foundation

The Benter Foundation was founded in 2007 to help communities and individuals thrive. Since then, the Foundation has invested to advance a more livable Pittsburgh, emphasizing the city’s urban core. Reaching beyond Pittsburgh, the Foundation supports peacebuilding efforts and innovators who create new knowledge to tackle large scale issues. Pathbreaking solutions are needed in health challenges like Alzheimer’s disease and opioid abuse. The Benter Foundation believes that the battle against Alzheimer’s will be won through innovative scientific research.